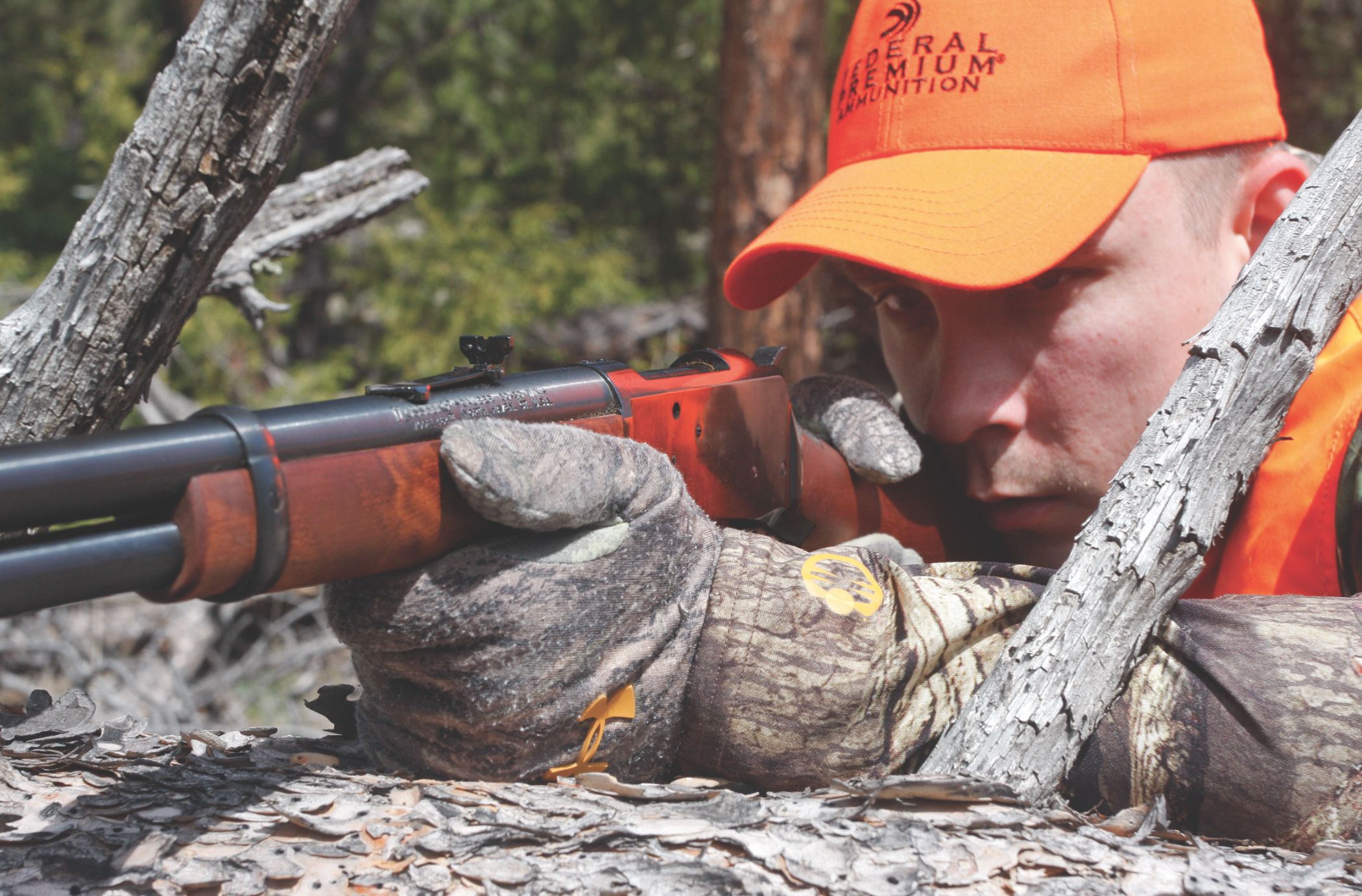 Selecting the best deer hunting rifle for your style of hunting might be easier than you think. Here are some simple guidelines to start you down the right path.

If you haven’t heard arguments about what constitutes the perfect deer rifle, you’re probably deaf. Deer camp debates have raged since Grandpa shot his 13-pointer with a .25-20 Winchester — they’re all over the Internet. Nearly every hunter has an opinion.

You’re about to get my two cents worth. I’m qualified to settle it once and for all, not because I’ve killed deer with a variety of top-shelf rifles. I haven’t. But if every deer hunter — your buddy, the outdoor writers, and that know-everything-guy who haunts the local gun shop — would stop and think about what it takes to kill a deer where he or she hunts, it would go a long way toward making peace in the valley.

Cartridges for All Occasions

Let’s begin with the cartridge you shoot and what bullet is seated in its front end. When I was starting out, I shot a couple of deer with the little .222 Rem., a pipsqueak in the deer woods. An experienced hunter I respected told me it was so fast that, “If you hit a buck in the butt it will rupture the blood vessels in his head. And it doesn’t have any recoil!”

The part he said about recoil was true, but the rest was baloney. If you’re going to use a .22-bore cartridge (or smaller) to do the job, you need to make a very well-placed shot, like the neck shot I made on my first buck. I made a marginal shot on my next buck that clipped a lung. I recovered him, but I’ll tell you this — even the .22 Eargesplitten Loudenboomer won’t kill a deer quickly with a marginal shot, and we all make a marginal shot from time to time. I could throw every hunter who never has or never will make a marginal shot into the back of my pickup and still have room for a cord of firewood.

To be a candidate for “perfect” in my book, I suggest a bullet no lighter than 120 grains. That rules out the popular 6mm cartridges, including the .243 Win., the 6mm Rem. and a bunch of others not so well known. These cartridges have some passionate supporters, but that only reinforces my point that the 6mms are not for everyone. The heaviest factory bullet you can shoot from a 6mm weighs 105 grains. Some will argue that the lighter bullets might actually be more effective, but whatever you shoot from a 6mm, it’s still a bit on the light side if you don’t make a well-placed shot.

But there’s that “well-placed shot” phrase again. While any 6.5 cartridge will kill the biggest deer in the world, if you hunt Maine and Vermont bruisers or Canadian heavyweights, you might want to move up to calibers that shoot heavier bullets.

Every shooter has his or her personal tolerance for recoil, so if a cartridge is going to be perfect you need to be comfortable shooting it. If a hard-kicking rifle doesn’t faze you, go ahead and shoot a .30-06 with a 200-grain bullet. Otherwise, opt for something along the lines of the 7mm-08 with a 120-grain bullet or the .308 Win. with a 140-grain bullet. You don’t need to go higher than .30 caliber for deer, but if you want to — and don’t mind the recoil — you can.

The fact is, there is a whole range of options when it comes to selecting the perfect hunting cartridge. The key is to select one that you’re comfortable shooting (recoil) and that will get the job done with any shot to the vitals of a deer (terminal performance).

So Many Rifle Options

Assuming you’ve made a decision on the cartridge, somewhere from .260 caliber on up, it’s time to consider your rifle. Here again, there are many to choose from. Whether you select a semiauto, single shot, bolt action, lever action or pump depends largely on the kind of hunting you do, and what’s available at a price you’re willing to pay.

Single-shot rifles have their admiring aficionados, but for most of us they are not the perfect choice. They’re highly reliable, but most hunters are too slow to get off a follow-up shot.

Follow-up shots are quick and easy with semiauto rifles, and the action spring reduces recoil before it comes to the end of its travel, making it easier to stay on target. In recent years, semiauto AR-platform rifles have become popular with American hunters. One drawback is that these rifles are offered in limited calibers and they can be a little awkward in the field.

The bolt action is the most common rifle you’ll find in the deer woods. It’s accurate, dependable and easy to handle. Cycling the bolt ejects the empty round and chambers a new one, but it has an inherent disadvantage you’ll need to overcome — cycling the bolt will pull your eye away from the sights, and target acquisition for a second shot might take a little extra time.

That’s less of a problem when shooting the light and easy-to-operate lever action. The problem here is that fewer cartridges are chambered in lever-action rifles. If you’re OK with a .30-30 Win. or .300 Savage, a handgun cartridge, or a mere handful of others, you’re good to go.

That brings us to the pump-action rifle. If you track deer in the New England woods, there’s nothing like a well-worn and well cared for pump rifle for smooth operation. Up there, you’ll commonly find Remington Model 760s chambered in .270 Win. or .30-06 in Chevy Suburbans and pickup trucks headed for deer camp.

If you choose a caliber that’s comfortable to shoot, and it comes in an action style you can operate confidently and reliably, you’re on your way to the perfect deer rifle. But next you have to select a sighting system — most commonly a riflescope.

Making Sure Your Rifle’s Picture Perfect

The scope sight is not absolutely necessary. Before they came along hunters killed plenty of deer using rifles equipped with “iron sights.” Old-timers avoided scopes, believing they were fragile, unreliable and heavy. If that was true then, it’s not true now. Almost everyone puts a telescopic sight on their deer rifle. Countless brands have flooded the marketplace, and few hunters agree on which is the best.

My advice is simple. First, buy a scope that has fully multi-coated lenses. Lens coatings allow more light to get through to your eye and less light is mirrored back out the end it came in from. The quickest way to avoid getting technical is to say that riflescope description not using these three words — “fully” and “multi” and “coated” — is a sure way to identify a cheap scope.

Second, buy a scope with a reputable name and a strong, no-questions-asked guarantee. Keen competition in the riflescope industry requires the best companies to back their products.

Third, buy the best you can afford. The less you spend, the more research you should do. If you spend $300 or more, you’re probably OK. Drop the ceiling to $200, and you need to be more careful. Spend $100, and you need to think very hard. Find out how satisfied others are with the scope you’re considering.

Finally, you need the mounts that connect the scope to the rifle. You can spend from $20 to $100. The point here is to make sure nothing moves once everything is fastened down and the rifle is sighted-in. Again, buy the best you can afford.

When selecting a deer rifle, don’t expect to get it right the first time. I didn’t. As I mentioned, I began hunting with a .222 Rem. The gun was a Savage Model 340. Light recoil is often the main consideration for a youngster, but that often means a light bullet — and too light is not a good idea. From there I moved up to the .30-06, a Winchester Model 70. That’s one incredible caliber and rifle combination. With the right bullet it will take animals far bigger than white-tailed deer. But mine was a Featherweight model with recoil about equal to Thor’s hammer, and I dreaded sighting it in.

I moved down to the .243 Win. in a Remington Model Seven. The .243 Win. is famous for being a “dual purpose” cartridge, suitable for both varmints and deer-sized game. The trouble is “deer-sized” isn’t very specific — the biggest deer are almost caribou-sized.

Back up I went, this time to a 7mm-08. I stuck with a Model Seven, and later swapped the blued version for stainless. That’s my main deer rifle today.

Am I saying the 7mm-08 in a stainless Model Seven is the perfect deer rifle for you? No. It might not be perfect even for me. I’d love a Kimber Model 84M Montana, but the sweeter the rifle the steeper the price. And my Remington, topped with a Leupold 3.5-10x40mm scope, will do everything I ask it to do.

I haven’t discussed velocity and trajectory, barrel length, barrel twist or stock bedding. Or mentioned bullet design and construction, ballistic coefficient or terminal performance. I neglected the debate about long-action vs. short-action cartridges (an issue mostly with bolt-action rifles), or considered how far most shots are likely to be. Nor did I discuss the terrain you hunt in, whether you’re a still-hunter or you hunt from a treestand. Our discussion could go on endlessly because these variables can make big differences.

I could conclude that the perfect deer rifle for every hunter, and every style of hunting, doesn’t exist. The truth is this: If you’re killing deer with the rifle you’re using, even if it’s outside the parameters I’ve outlined, it’s doing the job. If you call it perfect, who’s to argue? If you’re not quite satisfied, then make a change.

When it comes to “perfect,” it’s worth noting that the Preamble to our United States Constitution starts out with some interesting words: “We the People of the United States, in order to form a more perfect Union… .” The Constitution was made not for a nation that’s perfect in some absolute sense, but for a nation designed to get better. And it’s to suit a united people.

In a way, it’s the same with a deer rifle. Your idea of a perfect deer rifle might change, but what’s important is striving for a more perfect union between the rifle and the person shooting it — not your buddy, or some outdoor writer, or that know-everything-guy who hangs out at the gun shop. The person who is pulling the trigger is the important one. That happens to be you.

— Steve Sorensen, aka “The Everyday Hunter,” is an avid deer hunter from Pennsylvania.