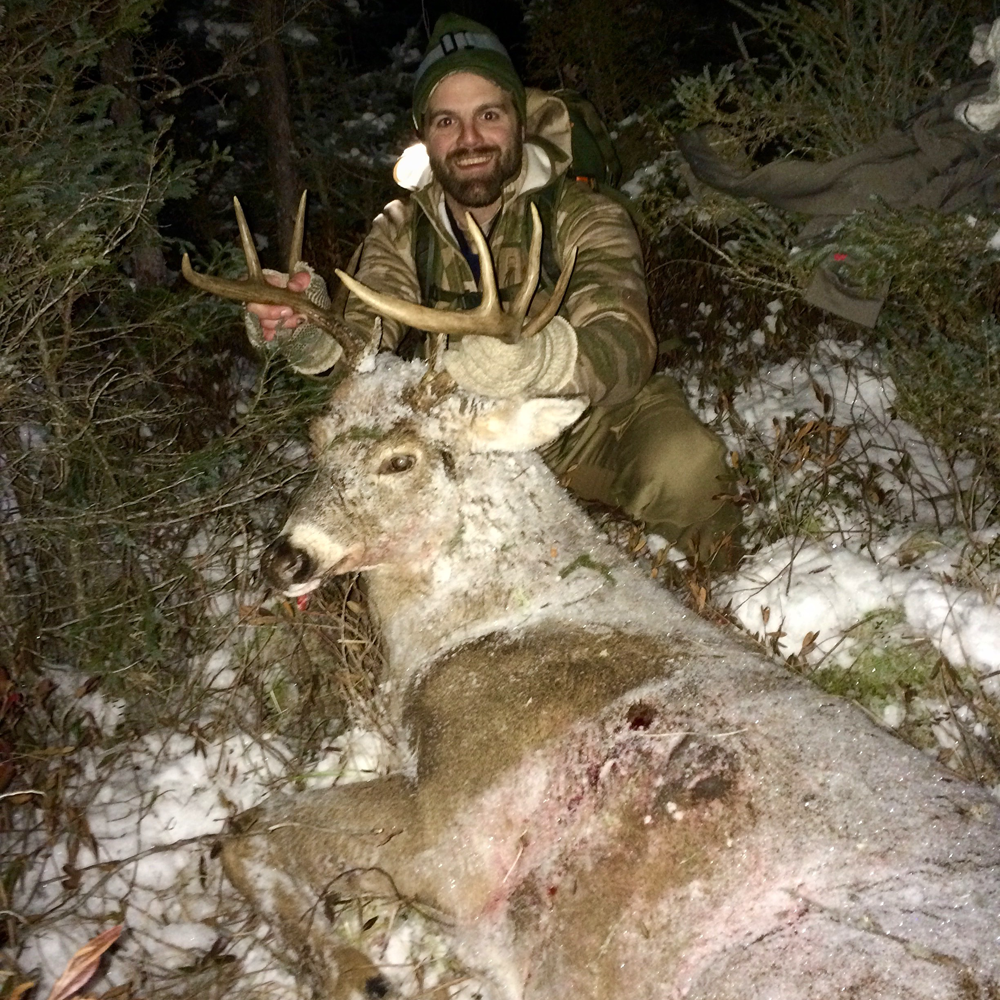 Have you ever sat all day — or several days — in tough conditions without seeing a deer, then when one finally shows up you almost don’t believe your own eyes that it’s actually a deer?

That’s how it happened for me back in early November 2017 while bowhunting on National Forest in northern Wisconsin. I was a few days into a week of vacation and the hunting had been slow so far to say the least. I had only seen a few does, even though it should have been prime time for bucks to start moving more in that area. But that’s the way it goes in those big-woods settings.

The National Weather Service forecast had been predicting a northwest wind carrying snow and colder temperatures for the next day, and it was spot on. When the alarm went off at zero-dark 4:00 a.m., the wind was howling and there was already a couple inches of snow on the ground. After a good breakfast, a several-mile drive to my walk-in point, I stuffed an extra layer in my full pack, strapped my climbing treestand to the pack, shouldered up and headed in.

The snow and wind never let up over the course of the 1-1/2 mile hike in to my spot for the day, but I was hopeful it would get bucks moving and kickstart some seeking and chasing in the area. The northwest wind was perfect for this spot in a classic terrain funnel full of scrapes and rubs. That, combined with the remote location and lack of human traffic so far off the road, made me think that one or more bucks might pass through during daylight hours at this time of the rut.

The scouting, the sign and a hope to catch a buck in the daylight kept me up in that tree all day. The wind howled, the snow continued to fall, and the temperature barely hit 15 degrees. Needless to say, with a half-hour left of shooting light, not a single deer had shown itself. Even the ravens, red squirrels and chickadees were nowhere to be found.

Then the snow stopped, and the wind too. It was suddenly eerily quiet. After checking my watch to see there was still more than 20 minutes of shooting light left, I heard a crunch. And another, and another.

No way, it’s not a deer. That’s what I thought anyway, until I turned to look and sure enough, it was a deer. It was walking from the west to the east right through the funnel.

Wow, it’s a big deer, a buck, a nice buck! (There’s no age or score estimating here. It’s either a buck I want to shoot or not.)

As I grabbed my bow to ready myself for a shot, the buck stopped on the edge of a scrape, turned toward me and stopped again. He was nervous and tense. I already knew that scrape was 38 yards away after ranging it a dozen times that day. His head raised up with his nose in the air, testing for something that didn’t seem quite right. By now I could tell he was a nice 10-point buck with broad, bulky shoulders and a linebacker’s neck.

Focus on the vitals. I’ve messed up too many opportunities with these ultra-wary big-woods bucks in the past, and didn’t want it to happen again. He took two steps backward, obviously nervous. As I drew my bow and reached my anchor point, he stepped to the left and perfectly broadside. My 30- and 40-yard pins bracketed his vitals, and everything else went out of focus. I distinctly remember the tunnel vision of seeing nothing else but those pins and his vital zone, then let the arrow go.

A loud THWACK, a flash of two bounds into the thick pines, and it was quiet and still again. All that action had maybe taken 20 seconds at the most, and now it was like nothing happened at all. Did that really just happen?

I knew it must have when I began to shake and had to grab the tree to steady myself. After calming down awhile and saying a few prayers of hope, I climbed down the tree and shed my heavy warm clothes to start looking for the arrow and the blood trail.

By that time it was completely dark, quiet and getting colder. When I found the arrow covered in bright blood, stuck perfectly in the snow a few feet beyond the buck’s tracks I was pretty confident in the shot. After tracking it 25 yards to the edge of a huge swamp, I felt sick. All I could think of was losing the buck in a swamp that could swallow up any living thing. Fortunately, only another 30 yards into the marsh the buck was on its side, hair half covered with the day’s snowflakes.

I sat down next to the buck with my hand on his thick, dark hide and massive shoulder, said a quick thanks, and took in the moment. Remote, wild, public land, with a true ghost of the northwoods. These big-woods bucks survive brutal winters, wolves, coyotes, bears, bobcats and hunters. When we do get a glimpse of one, it is often fleeting, and it may disappear without a trace. Every encounter with one leaves a lasting memory.

There was still a ton of work to do to get this buck out of the woods, but that’s for another story. At that moment I just enjoyed the surroundings and the experience that public land had just given me, and it once again proved that anyone can find adventure and success on our great public lands.

Learn How to Stay Undetected on Public Land Hunts