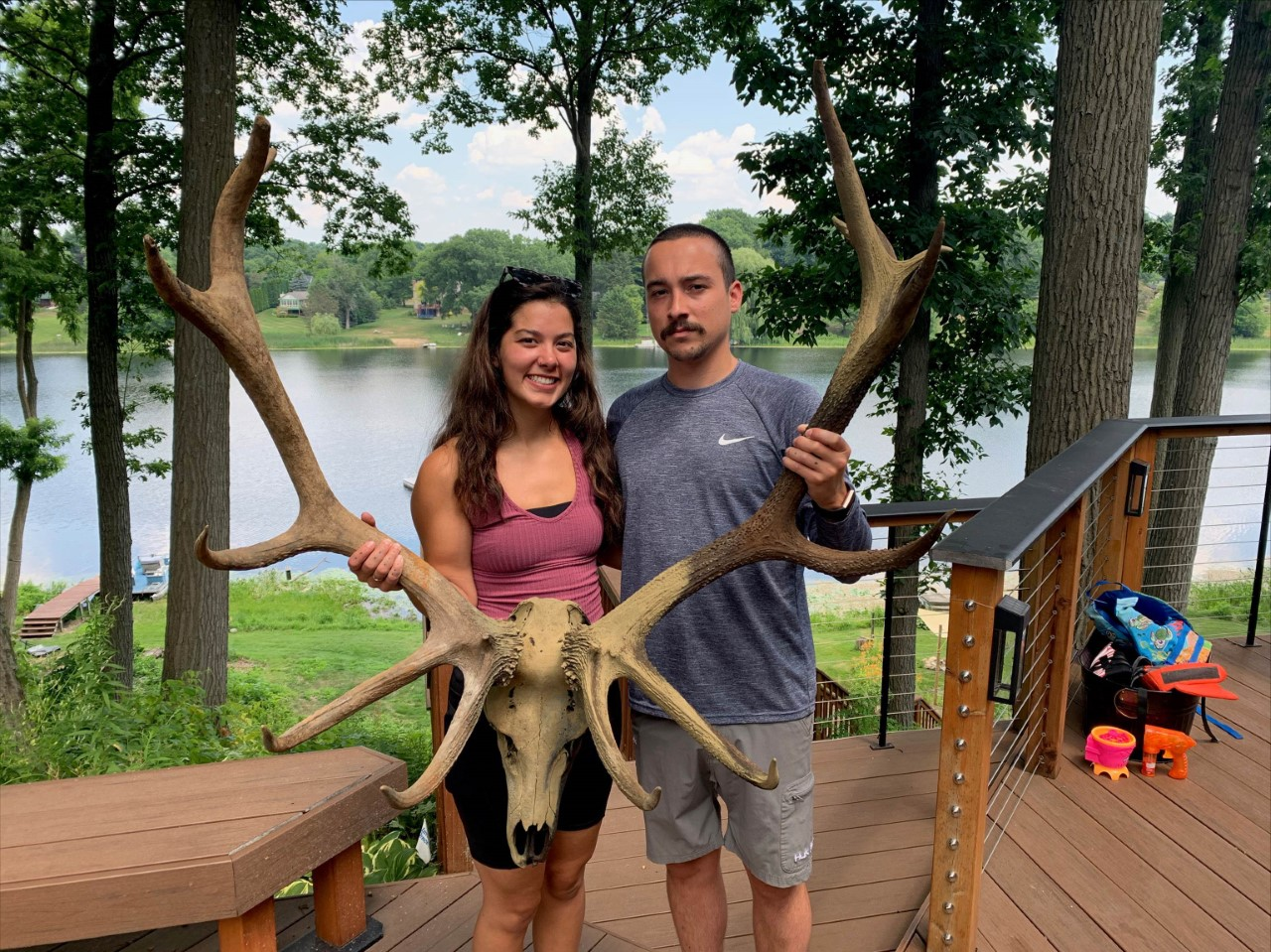 UPDATE: 7/31/20: Scientists announced today that they have narrowed down the age of the elk skull pulled from Lake Sullivan earlier this summer by Michael Bleau as he was moving a portable dock. Radio-carbon dating results from the breathtaking 6-by-6 bull elk skull have revealed when this majestic animal met its demise. What’s more, the research indicates this the elk was most likely among the last of the state’s native population.

According to Dr. Michael D. Stafford, director of Cranbrook Institute of Science, radio-carbon dating indicates the elk died almost 300 years ago. This puts the find in historic time, and near the very end of the Eastern elk’s presence in Michigan. And the chance, with that date, of the specimen being an Eastern elk is a near certainty. The last eastern elk was shot in Pennsylvania on September 1, 1877. The subspecies was declared extinct by the United States Fish and Wildlife Service in 1880. Another subspecies of elk, the Merriam’s elk, also became extinct at roughly the same time.

Conventional Radiocarbon Ages and sigmas are rounded to the nearest 10 years. The radio-carbon sample was analyzed by Beta Analytic Inc. of Miami, Fla.

To put that all in perspective, let’s take a look at a timeline:

1701: Antoine d Lamothe Cadillac establishes a trading post and calls it Fort Pontchartain du Detroit. The post eventually becomes a city, and its name is later shortened to “Detroit.”

1720 to 1744: A period of peace, fur trading and expansion in this land, which is called New France (it is later renamed “Michigan”).

1730-ish: A 6-by-6 bull elk dies in what is now Washtenaw County, Michigan. The elk’s skull and antlers sink to the bottom of Lake Sullivan.

1760: Fort Pontchartrain du Détroit was peacefully turned over to the British after Quebec was defeated.

1783: The area that is now Michigan was included with the territory ceded by Great Britain to the United States by the Treaty of Paris that ended the American Revolutionary War.

1805: Michigan Territory was created, with Detroit designated as the seat of government.

1908: General Motors is founded in Flint.

1935: In the midst of the Great Depression, the United Automobile Workers of America (UAW) is organized in Detroit.

1947: Fred Bear moves to Grayling, Michigan, in hopes of starting an archery business.

1959: Berry Gordy Jr. takes out a loan from his family to start Mowtown Music in Detroit.

1980: A presidential convention (Republican) is held in Detroit for the first time.

1999: Hunters bag 544,895 whitetails in Michigan — a national record harvest that is eclipsed the next year by Wisconsin.

2020: Michael Bleu is  moving his portable dock that’s floating on Lake Sullivan when he notices something is tangled up in the anchor ropes. He works on it for a while before pulling it up to the surface. Tangled in the ropes is the 6-by-6 elk skull and antlers.

Michigan’s native elk disappeared around 1875. Today’s elk herd dates back to 1918, when seven western animals were released near Wolverine. From that reintroduction, the number of animals grew steadily to about 1,500 elk in the early 1960s. They reached the point where limited hunting was possible in 1964 and 1965.

Here’s the original news story on the elk skull, as first reported by Deer & Deer Hunting:

Michael Bleau has always daydreamed about reeling in a lunker. Those dreams came true last weekend, but the lunker he boated wasn’t of the gilled variety, and he landed it without actually going fishing!

In fact, it was quite large-boned … and it wasn’t even indigenous to the lake.

When Bleau was moving a dock platform on Lake Sullivan, his dock anchor rope caught ahold of something on the bottom of  the Fenton, Mich., lake. Imagine his surprise when it surfaced — and was a full rack and skull from what was a monster bull elk.

“We are trying to learn more about the skull and rack,” he said. “It was snagged on our anchor line in about 40-50 foot of water. It’s nicely intact as you can see from the attached photos. It measures 43-inches left to right (across the front), 50-inches tall and the depth (front to back) is 24-inches.”

The odd thing? Elk do not inhabit that part of Michigan. Well, not in any recent decade, that is. There is a small population in the northern part of the Lower Peninsula. Lake Sullivan is about 60 miles west of Detroit in Washtenaw County.

“We sent an email to the Department of Natural Resources and also Michigan State University this weekend,” Bleau said. “Any information about how we can identify the species and potential age would be great or where we might find someone who would buy something like this.”

“We had an archeologist over this weekend and he said the skull and rack are partiality mineralized and that due to where we found it. He said that indicates that the animal most likely fell through the ice before 1850. That’s just a guess, though. He picked the date based on when elk were living in this part of the state. Pretty wild…if it’s true.”

7/10/20 Update: Dr. Michael Stafford and Max Hella from the Cranbrook Institute of Science have received the elk and are going to treat it for conservation and radiocarbon date it. Within a month or so we should know much more about the origins of this animal.

Editor’s note: If you have any information on elk in this region of Michigan, Bleau would like to hear from you. You can email him at: mbleau@industry-scope.com