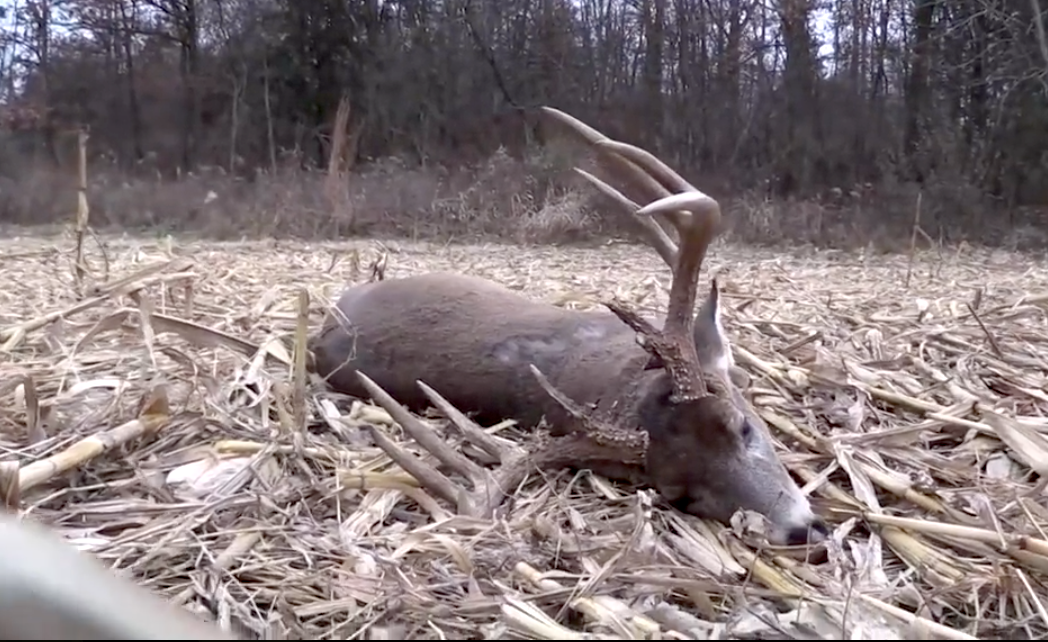 If deer hunters only went out on perfect days, they might miss some of the best bowhunting of the season. Make the most of your bowhunts with this information about how weather affects whitetail deer.

Most serious whitetail hunters look closely at weather conditions when determining when to venture afield — and weather is a very big (maybe the biggest) topic of conversation among trophy bowhunters.

We have all heard the many different comments about how weather affects whitetail movement:

“Hunt when it’s a little cool — the deer move more then.” “A little precipitation makes deer move, so hunt then.” “I swear I see the big ones when the barometric pressure is low.”

“I know that a change in barometric pressure is when the trophies come out.”

“Hunt wind velocities up to 17 mph, but not over that.”

All of these opinions are honest and sincere, and reflect what people remember from their personal experiences.

To examine what weather conditions might be advantageous for bowhunting trophy whitetails, I collected data from the U.S. Climatological Center and compared various weather factors to bowhunting success. This information was taken from an area encompassing nine central Wisconsin counties — those in close proximity to the Dane County International Airport’s weather station, where 999 trophy white-tailed bucks (as defined by the Pope and Young Club) were killed by bowhunters over a 13-year period — 2002-14 — during October and November over a total of 793 days. My statistician assures me that this is a large enough sample size over a long enough time period to be confident of the results.

That weather data were analyzed and compared to trophy bowhunting success to identify any correlations that might indicate the best days to hunt. We — my statistician and I — were able to get weather conditions that put most of the buck kills within 30 miles (and all within 60 miles) of the weather station on the day of the harvest.

First, a few clarification points:
— This article deals only with bow-hunted trophy whitetails. It does not include the harvesting of all deer. 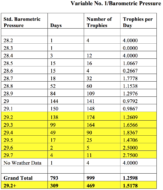 VARIABLE NO. 1: BAROMETRIC PRESSURE
First, let’s have a look at how barometric pressure affects hunting success.

VARIABLE NO. 2:
TEMPERATURE VARIATION FROM THE AVERAGE
Here we used the average daytime temperature and correlated it with the day the trophies were

taken. Of course the temperature varies throughout the day, so we used the average daytime temperature. Any given minute in a treestand is a crap shoot, but the stats indicate the odds of a trophy buck encounter are better at near the average temperature.

The statistics in the table to the left are clear and also surprising. The data suggest that the best trophy hunting occurs at near average temperatures. This is surprising to me because many bowhunters I’ve talked to tend to hunt the slightly lower temperatures more aggressively. With that in mind, the statistics should have given a higher probability of success during lower than normal temperatures, but this was not the case according to this data. As you can see, the highest number of trophies per day was actually 57 trophies taken on the 29 days where the average was 5 degrees above the normal.

As a longtime bowhunter, my personal observations make me certain that deer in general move more when the temperature is a little low.

Why would there be as many trophies taken at high as at low temperatures? Maybe bucks move more then because they are searching out does.

I am not sure, but again, the stats suggest it is best to hunt trophy bucks at near-average temperatures. 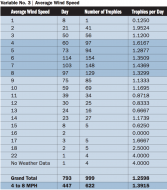 The lower number of trophies killed at wind speeds above 8 mph makes sense if for no other reason than fewer hunters tend to hunt then. Whether this lower success rate is a result of deer behavior or hunter behavior is unknown.

At first, I was a little surprised that low wind speed resulted in lower trophy success. However, it makes sense when you realize that a deer’s nose gives it an advantage at low wind speeds.

The data imply that higher wind speeds are bad for trophy taking, and wind speeds lower than 4 mph decrease your chances for success.

NOW, LET’S HAVE SOME FUN
If we do a quick summary of single factors, it shakes out like this:

Now let’s combine these single factors (below): the high barometric pressure and temperature ranging from –8 to +9 from the average, you get a trophy harvest of 1.735 of 138 percent of the advantage day (average day = 1.2598 trophies per day).

Now let’s look at three weather factors: high barometric pressure, average wind speed, and near aver- age temperature. You get a trophy harvest of 1.938 or 154 percent of the average day. Basically, if you hunt on days that have these characteristics, you should have an advantage of about 1.5 times what an average day would give you for taking a trophy whitetail.

SUMMARY
These statistics were taken over 13 years in central Wisconsin. I will not lie to you and say that I know that these stats can be applied everywhere with 100 percent accuracy. However, it makes sense that the general information presented here should be applicable in most bow whitetail trophy hunting situations at most locations.

*This figure is most likely in part affected by hunter behavior so the real figure it is likely to be somewhat less than this figure.

— Michael Couch is an avid whitetail hunter and longtime Deer & Deer Hunting subscriber from Iowa. He is presently analyzing more than 48,000 trophy bow kills for optimal times to hunt.