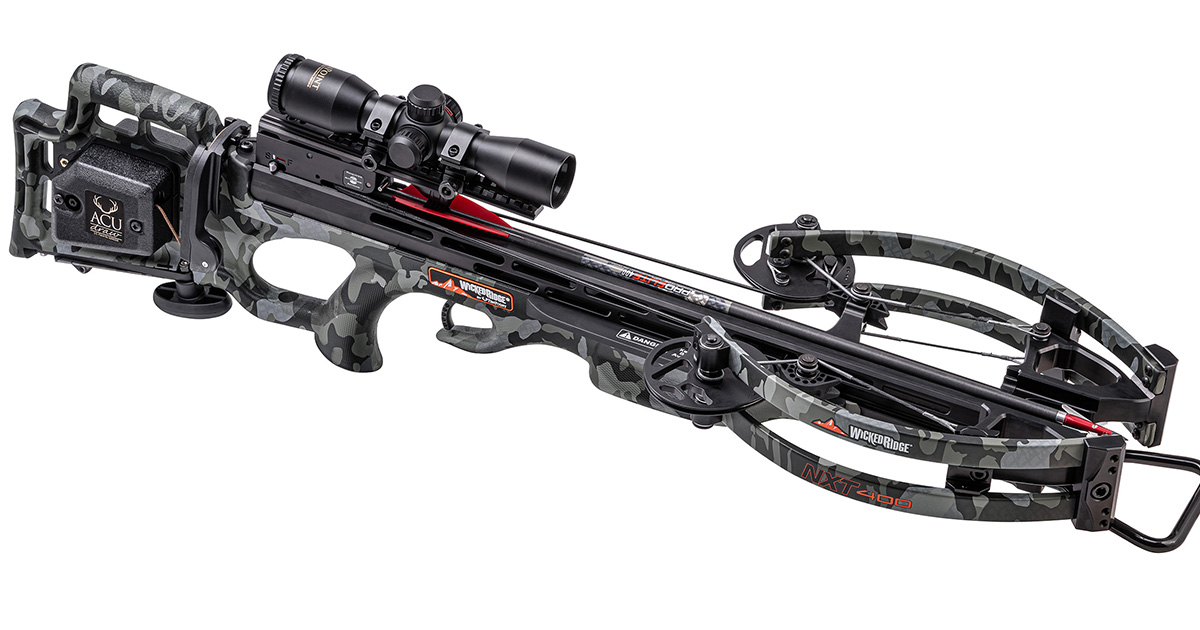 The Wicked Ridge NXT 400 is the brand’s narrowest and most accurate crossbow ever. Wicked Ridge Crossbows’ NEW American-made NXT 400 is built unlike any crossbow in its price-range — featuring TenPoint’s Narrow Crossbow Technology™ (NXT) bow assembly that measures 6-inches wide when cocked and delivers speeds of 400 feet-per-second with same-hole down-range accuracy.

“Our Made in America Wicked Ridge line of crossbows continues to distance themselves from import models in terms of quality, performance and value,” said Rick Bednar, TenPoint® CEO. “At $1,099, the NXT 400 features a combination of width, speed, accuracy and built-in cocking device that is unrivaled at its price-point on the crossbow market.”

At the bow assembly’s foundation is a lightweight CNC machined aluminum riser featuring the company’s 70/75 aircraft grade aluminum TRI-LOCK™ pocket system that ensures perfect alignment between the pocket and limbs for increased accuracy.

The bow assembly is mounted to a lightweight 21.5-inch machined aluminum barrel, which dramatically reduces noise, weight and vibration. It is fitted with the company’s 3½-pound auto-engaging safety T-5 trigger housed in a lightweight machined aluminum trigger box. Its weaver-style dovetail is fitted with a nylon-filament arrow retention brush that improves arrow grip and alignment to further reduce noise and vibration. Like all Wicked Ridge models, the trigger assembly is equipped with a DFI™ (Dry-Fire-Inhibitor). An integrated string stop system is also included that fits into the end of the barrel to reduce noise and vibration.

The NXT 400 embeds its barrel and trigger assembly in the company’s lightweight Functionally Superior Bullpup™ (FSB) stock. Molded from PolyOne™ OnForce™, the high-tech stock is built with optimal comb-height and length-of-pull and uses strategically placed cutouts in the butt stock to reduce weight.

Like all Wicked Ridge models, this model is equipped with dual-purpose safety wings to reduce noise and vibration as well as helping to keep the shooter’s fore-grip hand safely below the flight deck.

The bow and stock assemblies combine to create a crossbow unlike any other at its price-point — weighing in at 7.4 pounds, measuring only 33-inches long (w/o stirrup), and shooting blistering speeds of 400 feet-per-second with the included 400-grain Pro Elite 400 carbon arrow.

The NXT 400 is equipped with the ACUdraw® crank-cocking device that provides effortless cocking for hunters of all ages and an illuminated 3x Pro-View™ Scope. The NXT 400 is factory sighted-in, and double-dip fluid imaged in the brand’s exclusive Peak™ camo.

The lowest priced American Made crossbow at just $399.99, the Blackhawk 360 shoots 360 feet-per-second, includes a package, and is primed to outperform the growing number of import models in the entry-level crossbow category.

“The new Blackhawk 360 is the best crossbow available for under $400,” said TenPoint® CEO, Rick Bednar. “What separates this crossbow from its competitors is its American-Built quality, and out-of-the-box accuracy, and TenPoint’s world renowned customer service.”

The Blackhawk’s narrow, 175-pound bow assembly is built for success in tight hunting situations and consists of a lightweight riser and machined aluminum limb pockets fitted with 11” WRX™ laminated limbs. Powered by heavy-duty machined 5S Cams™ and DynaFLIGHT 97 string and cables, the Blackhawk measures a narrow 15-inches wide and drives arrows down-range up to 360 feet-per-second.

The Blackhawk 360 includes a fully integrated fore-grip, is backed up with elongated safety wings to help keep the shooter’s hand safely below the bowstring release path. Its fully enclosed trigger guard provides added safety as well. In addition, the stock features a picatinny rail below the front of the barrel to mount additional accessories. Finally, like all Wicked Ridge crossbows, the stock is fitted with TenPoint’s DFI™ (Dry-Fire-Inhibitor) and ultra-crisp 3½-pound trigger.

Upon easy, 1-bolt assembly, the advanced design measures an easy-to-handle 35-inches long and weighs in at a featherweight 6 pounds.

Pre-sighted for 20-yards at the factory, the Blackhawk 360 has a tactical black stock and PEAK™ camo limbs. It includes a 4×32 scope, 3 aluminum arrows, rope cocking device and a quiver.