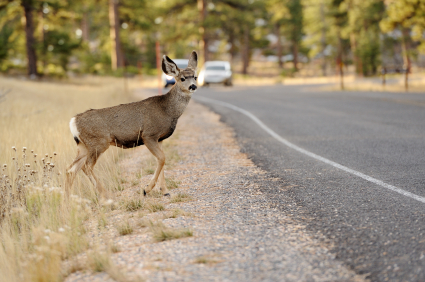 I’ve never been involved in a deer-vehicle accident — knock on wood — despite having driven for almost 65 years. Had a few close calls, but have never hit one; hope I never do. According to Utah State University professor Michael Conover, 1.5 million motorists, annually, are not so fortunate.

Vehicle-mounted whistles — technically referred to as auditory deterrents, but more commonly called deer whistles — are probably one of the most popular. Many motorists confidently rely on vehicle-mounted whistles as their primary means of avoiding deer-vehicle collisions. Aside from being inexpensive and easy to use, manufacturers claim they are “scientifically sound.” However, research evidence suggests otherwise.

Any hunter knows that deer have extremely sensitive hearing. Famed researcher Dietland Muller-Schwarze compares a deer’s hearing ability to that of a satellite dish, “pointing to the heavens, collecting signals for the owner to sort out and tune in.”

Even when its ears are stationary and at rest, a deer can tell whether sounds come from ahead or behind. Because each ear can move independently, deer can pivot one ear toward the sound, and by comparing signals received from each ear, they can pinpoint the source of the sound.

According to Deer & Deer Hunting Field Editor Phillip Bishop, “Sounds are described based on two qualities: 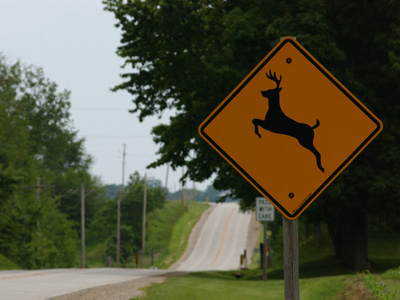 Tests conducted by University of Georgia researcher Gino D’Angelo, and his coworkers, indicated that whitetailed deer can effectively hear within the range of 0.25 to 30 kilohertz, with their best hearing sensitivity between 4 kHz and 8 kHz. (Note: a kilo equals 1,000.)

As might be expected, the whitetail’s best hearing range overlaps primary frequencies of their vocal communication. For example, earlier studies using sonographic analysis, identified 12 whitetail vocalizations. Most were composed of frequencies between 1 kHz and 8 kHz.

Humans hear best between 2 kHz and 5 kHz, with an upper limit of about 20 kHz. Because deer can detect higher frequencies, the University of Georgia group suggested further research on the use of ultrasonic whistles was warranted.

The Heffners, from the Whitetail Deer Research LLC, Ohio, obtained behavioral audiograms of two captive deer using a “conditioned-suppression avoidance procedure.” In simple terms, they conditioned thirsty deer to drink from a metal bowl that was wired to present a mild shock. Sounds of various (pure tone) frequency were then presented at random intervals followed by a mild electric shock. A deer avoided the shock by breaking contact with the bowl, thereby indicating that it had heard the sound frequency tested.

Invented in Austria in 1979, deer whistles are still distributed by many companies in Europe and the United States. Simple air-activated whistles are relatively inexpensive ($5 to $10 apiece online), but electronic systems may cost several hundred dollars. The devices are generally attached to the front of the vehicle, and manufacturers claim they produce ultrasonic frequencies and warn animals of approaching vehicles, thereby reducing deer-vehicle collisions. 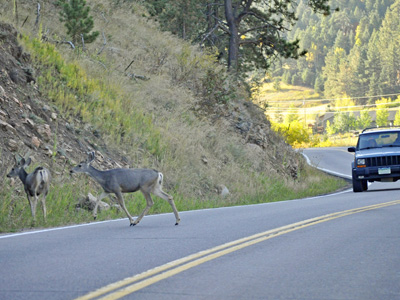 Early tests conducted in Finland indicated that canids, bears, deer and elk heard sounds emitted by the whistles because their ears moved. However, other investigators found the testing procedures were faulty.

In Utah, researchers Laura Romin and Larry Dalton detected no differences in responses from 150 groups of free-ranging mule deer to vehicles equipped with and without deer whistles. Although some deer ran away from the test vehicle, they did so regardless of the presence or absence of whistles.

A recent review of deer whistle effectiveness by University of Georgia researchers, led by Sharon Valitzki, came to similar negative conclusions: “Previous research on vehicle-mounted auditory deterrents was confounded by use of commercially produced devices lacking proper function and sufficient sound intensity to be audible to deer in roadway conditions.”

Apparently, some commercially available deer whistles do not produce sound of ultrasonic frequency, as claimed. In fact, some emit no sound at all under normal operating conditions.

When functioning as advertised, it’s important to recognize that deer whistles emit consistent, continuous sounds of equal intensity at one frequency. These so-called pure tones can also be produced using standard sound equipment.

For this reason, Valitzski and her group tested the effectiveness of a range of pure-tone sounds for altering the behavior of whitetails along roadways for prevention of deer-vehicle collisions. The study was conducted during April and June 2006 at the Berry College Wildlife refuge, located in northwestern Georgia, in an area with about 100 deer per square mile.

The Georgia-based researchers equipped a test vehicle with four high-frequency speakers calibrated to deliver selected frequencies between .28 kHz and 28 kHz. Speakers were set to emit sounds directly in front of the vehicle as well as to the sides. Levels of sound intensity were set high enough (70 decibels) to ensure that deer could hear the transmitted sounds, above vehicle road noise, within 10 meters (32.8 feet) of the roadway as well as 30 meters (98.4 feet) ahead of the test vehicle.

Two test areas were established and marked with a study area of influence, encompassing a roadway and a 10-meter buffer zone on either side. During each test, an observer recorded deer behavior in response to one of six randomly selected treatments, including five different frequencies produced by the vehicle-mounted sound system as well as a control (no sound), as the vehicle was driven about 30 mph through the test area.
Each trial was conducted either at dawn or dusk to maximize deer sightings, and only under ideal weather conditions to ensure the sound carried properly. Behavior of selected (i.e., focal) deer was recorded before and after being exposed to the test vehicle. The observers then scored changes in behavior as follows:

Based upon the observed response of 319 deer, the researchers concluded the pure tones did not alter deer behavior in such a way as to prevent deer-vehicle collisions. In other words, the simulated sounds of deer whistles were no more effective than no sound at all.

Overall, 54 percent to 71 percent of the observations were classified as neutral, meaning more than half the time deer did not alter their behavior in response to the test vehicle. Only the lowest frequency tested (.28 kHz) produced a significant response. And that was unfavorable, because deer were more likely to enter the roadway in response to the treatment.

Unlike some deer whistles, all sound frequencies tested were known to be audible to deer. Therefore, given the lack of deer response, the investigators suggest the following:
1. Deer may have too little time to react as desired.
2. Deer may lack the neurological ability to process the alarm information efficiently to respond as desired, or
3. Deer might not recognize the sounds as threatening.

Because these results were obtained using pure tones similar to vehicle-mounted deer whistles, it was concluded that such commercially available products would not be effective for prevention of deer-vehicle collisions.

How to Use Deer Whistles Best

For deer whistles to be effective, the sound should carry as far ahead and to the sides of a vehicle as possible, so that deer have time to react. Although the Georgia tests were only conducted under ideal weather conditions, the researchers could not transmit ultrasonic frequencies beyond their 10-meter-by-30-meter zone of influence, without damaging the sound-producing equipment. In addition, hearing safety of pedestrians is a factor, and certain laws regulate maximum permissible noise.

While devices emitting complex sounds, of alternating low and high frequency, might be more effective in altering deer behavior, and preventing deer-vehicle collisions, associated research is not very encouraging. In fact, I am unaware of any research demonstrating that deer are consistently frightened by a particular frequency or decibel level of sound — despite the claims made by manufacturers of such devices. Invariably, deer even habituate to sounds that are initially frightening.

Given their research experience, the Georgia-based researchers concluded the following: “Considering the challenges of producing sound at appropriate intensities and distances from a moving vehicle, deer hearing capabilities, human safety concerns, and our observed lack of behavioral responses of deer to sound treatments, auditory deterrents do not appear to be appropriate for prevention of deer-vehicle collisions.”