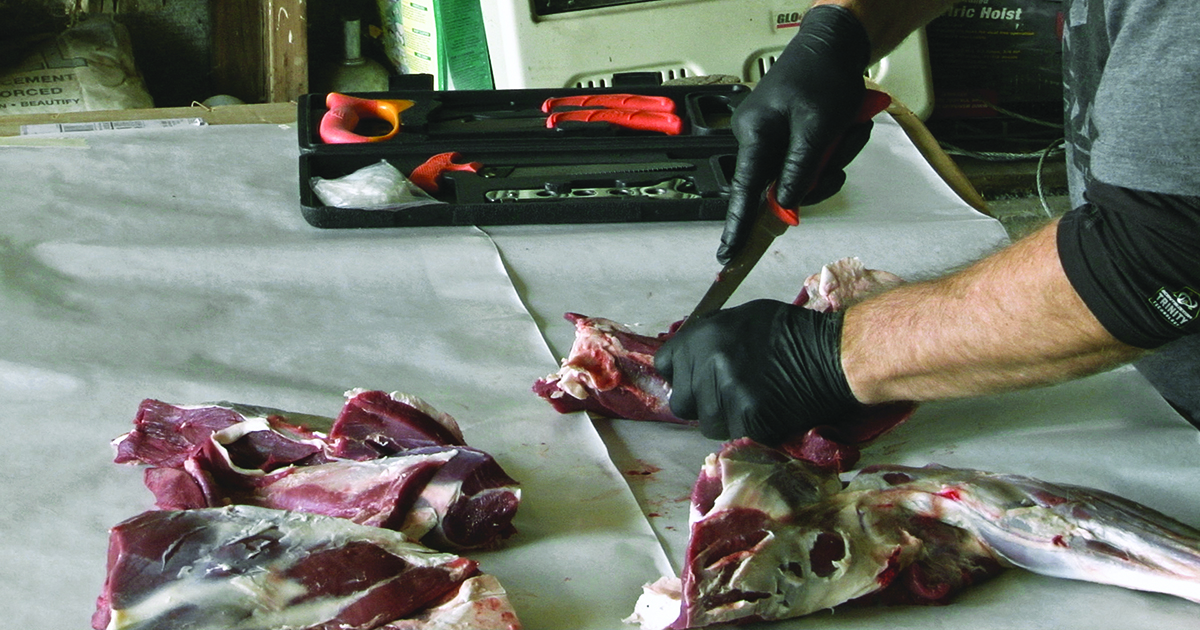 Everyone gathered around the table when we walked into the lodge with the grilled backstraps fresh off the pellet grill. The mouth watering aroma had everyone drooling like Pavlov’s dog, with the thought of sinking their teeth into the tender and flavorful meat. Two full loins, cut in half, were wrapped in foil to let them “rest” properly before cutting and serving for dinner. We’d cooked the prime cuts to medium-rare, then sliced them into ¼-inch medallions.

The sound of forks clinking on plates, the pile of meat was reduced to a fraction of its original size in seconds. Grunts of approval came from every corner of the room while the crew devoured the fresh venison.

I had killed a nice white-tailed buck on the first evening of our hunt, allowing me to properly care for the meat, prepare a meal, and share it with my friends in camp. Several people in the group claimed they didn’t care for deer meat. However, after eating the backstraps, which were marinaded for six hours and cooked on a Camp Chef SmokePro, even the doubters wanted deer meat to take home.

The slow cooking/grilling method eventually brought the meat to a safe internal temperature of 140°F, ready for serving. However, the tenderness and rich flavor of the meat was also due in part to its handling from the time the deer was harvested.

Meat is prone to spoilage because it contains bacteria and, when harvested, has the temperatures to promote bacterial growth. Bacteria, yeast and mold can rob you of excellent venison, and unless you take the appropriate steps, rotting will occur. Cooling the meat to ensure you reduce bacteria growth is the most important thing you can do to ensure good, healthy meat.

Anyone who has ever suffered from food poisoning understands how some bacteria can be downright gut-wrenching. Spoiled meat can make people sick, but proper handling will ensure you never have to worry about who you feed your venison to.

Whitetail Down — Now What?

Proper handling starts the minute your deer hits the ground. It should be field dressed as soon as possible to remove blood clots, internal organs, and most importantly, the animal’s digestive tract. The internal organs and entrails are also referred to as offal.

If the stomach or intestine has been shot, ruptured or cut, make sure to clean the inside of the cavity to reduce chances of Escherichia coli, or E. coli bacteria that can contaminate meat and has the potential to cause food poisoning. Stomach contents or intestinal fluids are easily contained in the inner cavity of an animal and can be wiped out with a paper towel, washed, and even scraped out initially. During the cold months, snow is an excellent way to absorb and clean out any blood or unwanted material in the carcass cavity.

To Skin or Not to Skin?

The question of when to skin a deer is a matter of debate among hunters, so I queried the experts at the Department of Food Science and Human Nutrition at Iowa State University. Dr. Joseph G. Sebranek says that whether the hide is on of off for aging is not critical except in how it might affect chilling and meat temperature. “If initial chilling of the carcass is slow and not well controlled due to warm temperatures (hanging in a garage or outdoors), then removing the hide would be a good idea in order to get the initial temperature down to 35-40°F,” he said.

“However, taking the hide off will allow the exposed surfaces to dry out if aging for several days and could also result in dust, dirt and insect contamination if hanging outdoors. The carcass should not be allowed to freeze because that does not allow for tenderization by aging and might even result in toughening of the meat. If initial chilling can be achieved with the hide on, it would be best, in general, to leave the hide on until you’re ready to cut up the carcass. Of course, skinning is easier when the carcass is warm, as opposed to one that has been thoroughly chilled.”

Can I Wash the Meat?

Water and bacteria are a recipe for disaster, and you always need to be careful when using water on meat, Dr. Sebranek explained. “It is a good practice to wash the carcass body cavity as soon as feasible after dressing because the internal body cavity surfaces can be contaminated from stomach and intestinal contents during dressing or as a result of shot placement,” he said. “However, the washed surfaces should also be allowed to dry quickly so that any remaining bacteria do not have a good opportunity to grow (they love water). Washing after hide removal is not really necessary because a good skinning job will leave a clean surface. If there is visible dirt, hair, etc. on the skinned surfaces, then washing would be OK.”

Water and washing have its place but always be aware of wet conditions. For example, you wouldn’t want to hang a carcass in the rain with the hide on or off. If the temperature of the meat were 40° F or higher, bacterial growth would occur rapidly.

Most of the time I hang meat so that the muscles firm up for cutting. A freshly killed animal has loose muscles that are hard to handle and cut. Allowing them to firm and dry, makes it easier to cut straight lines and maintain even thicknesses. My general rule of thumb is to age, or hang, animals over 2½ years of age. A young deer or elk can be cut after a day or two and be extremely tender. The older the animal, the longer and tougher the muscle fibers can get. Aging will encourage enzyme growth to help break down the muscles and make them more tender.

Sebranek says aging definitely tenderizes meat and is done commercially for high-quality beef. “Meat has proteolytic enzymes that slowly break down meat proteins to soften the texture and make it more tender. It is a slow process at 38-40°F and will require about 14 to 21 days.

“Monitor your wild game when it’s hanging, because it can dry out excessively, meaning you will have to trim the dark, hardened edges when butchering. Finding the balance can be difficult and only big, older animals will need aging for ultimate tenderness.”

To understand why meat spoils, I asked Dr. Sebranek to explain the process. He said, “The primary concern for meat spoilage is bacterial growth. Meat will be contaminated no matter what we do, we can only reduce that as much as possible and then slow down any subsequent growth of bacteria with good chilling and temperature control.

“Fat can also turn rancid with time and warm temperature, but this is usually a slower process than bacterial growth. Where fat rancidity and off-flavor come into the picture is if it develops during, say poorly controlled aging, and the meat is used for cooked sausage, the bacteria may be mostly killed in cooking, but the off-flavor of rancid fat will remain and can result in a flat or cardboard-like flavor in the cooked products.”

The best temperature for aging is between 38-40°F, according to Dr. Sebranek. “The tenderizing enzymes are more active at warmer temperatures and staying below 40°F delays spoilage bacteria. Cold storage of fresh meat after aging is best at as low an unfrozen temperature as possible (meat freezes at about 28°F) so 28-30°F is ideal if possible, he said.”

There are lots of tricks and techniques for cooling an animal carcass, and in many parts of the country hunters must find ways to deal with consistently warm temperatures. In Oklahoma, my outfitter stuffed two 10-pound bags of ice into the cavity of my field-dressed deer. He left the skin on and hung it by the back legs. It was hot outside, and I wasn’t sure the technique would work. Once the sun set and the insects disappeared, we skinned the animal, and the meat was cold to the touch. The hide had worked like an insulating blanket to hold the temperature of the ice throughout the deer. It was an impressive way of taking care of meat in hot weather.

I have seen other methods, where meat is placed in a cooler of ice water, but there are risks when using water. Sebranek said, “It’s best to use bagged ice or ice packs to chill meat if refrigerated space is not available, rather than direct water contact. The issue again is that bacteria love water. Short-term contact, such as washing with cold water followed by drying is OK.”